Posted on November 7, 2011 by sayitaintsho

When I was fifteen, I remember seeing this image plastered across news outlets: 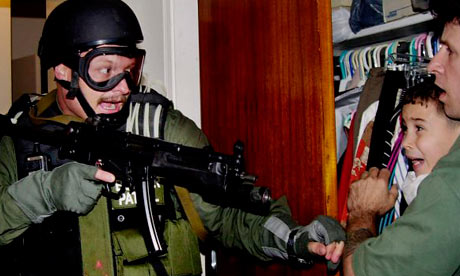 The boy, then six years old, is Elian Gonzalez. Caught up in a family dispute between relatives in Miami, Florida and his father in Cuba, he was taken away by the U.S. Border Patrol pursuant to a federal magistrate’s order. Elian reunited with his father and returned to Cuba shortly thereafter.

This was, of course, an extreme case. The United States government is no longer in the business of forcibly interfering with families, right?

The Applied Research Center (ARC) has just released a report entitled “Shattered Families”, which analyzes the rise in the deportation of undocumented immigrants and the effects on their children. According to the report, the Obama administration deported 46,000 parents of children who are U.S. citizens in the first six months of 2011. These children are then forced to enter the foster care system, making it nearly impossible to reunite with their parents. Here are a few key findings from the report:

South Asians make up a significant portion of the undocumented population, and as such, families in our community are at risk. You can read ARC President Rinku Sen’s remarks on the report here, and coverage from the Huffington Post here. Additionally, the ARC will host a webinar on November 10th, where they will highlight crucial policy recommendations. Please help to spread the word about this important report, both online and off.

This entry was posted in current events, politics. Bookmark the permalink.